Tripawds Supporter sites have no ads!
Skip to content

Tripawds is a user-supported community. Thank you for your support!

Oh my gosh! I am just so excited!   Last weekend Mama brought in a new foster dog and he is a tripawd like me!  Mama works with Schnauzer Rescue Cincinnati to help save schnauzies.  His name is Winston and  he is missing his left front leg instead of the right front like me.    Poor little guy was dumped at the shelter by his owners because he “wouldn’t listen”.  Guess those folks don’t know schnauzers too well because not listening is in our genes!

He’s a pretty neat fella, about 4 years old.  He’s growly, I think he just loves to hear himself talk!  He’s never mean, just growls to be growling. Mama calls him a chunky  monkey too.   I don’t understand exactly what that means since I thought he was a dog and not a monkey but I suspect it might mean he needs to lose a few pounds.  He reminds me of a fire plug!  But we all know us tripawds don’t need to carry any extra weight, our remaining joints have enough strain on them as it is.

I have never met another tripawd so I am pretty stoked about having him as a foster brother.  He gets around just fine too but it is funny to watch him pee!  He can’t lift his leg up like I can, he tries but then gives up and squats like a girly dog!  But I bet he will figure it out if he watches me enough.  He is already copying my “burn outs” that I absolutely MUST do after I pee on everything in the neighborhood.  Mama says she sure hopes someone will give ol Winston a chance and adopt him.  She knows first hand how special us tripawds are.  We can do anything we want and just have that extra special something to make up for our missing limbs.

If you would like to read more about Winston or consider adopting him, check his page out on Petfinder:  http://www.petfinder.com/petdetail/17043508

Remember, as the site says: It is better to hop on three legs than limp on four!! 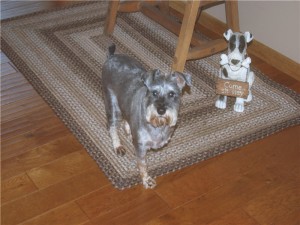 To remove ads from your site and others, upgrade to a Tripawds Supporter blog!

2 thoughts on “I have a Tripawd foster brother!”

A Day in the Life of a Tripod Dog is brought to you by Tripawds.
HOME » NEWS » BLOGS » FORUMS » CHAT » YOUR PRIVACY » RANDOM BLOG


Tripawds Supporter sites have no ads!